This installation was made specifically for the neo-Gothic Vleeshal, in Middelburg, and consisted of a computer-graphics video projection onto a large screen at the far end of the room opposite the entrance. Infrared sensors and seven pairs of blue lights along the floor defined a more than 30-metre-long path from the entrance area to the screen. As each single visitor walked towards the screen he or she passed between the infrared sensors and thereby interactively provoked a sequence of transformations of both the projected imagery and the accompanying spoken sound track.

This seven-stage sequence of digitally processed images was derived from artworks by Yves Klein’s Portrait of Arman (1962), Nagisa Oshima’s In the Realm of the Senses (1976) and Hieronymus Bosch’s The Garden of Earthly Delights (1500, approx.). The spoken sound track is a text written specially by the artist, synchronized to each of the image stages.

The sequence begins with a collage of the Yves Klein sculpture, which has been conjugated with a single frame from King Kong (1933) so that the International Klein Blue figure of Arman is seen to be holding the fainting heroine Anne Darrow in his arms. This is followed by a single frame of the strangulation scene in Oshima's film. The six interactive transformations that follow show a progressive digitisation of the Oshima image into an increasingly abstract arrangement of larger and larger pixels. Within these pixel blocks the Bosch painting gradually emerges, until it entirely fills the screen in the final image.

The architectonic presence of this narrative unfolds in the viewer’s body action. And the sequence reverses when the viewer walks away from the screen.

The singular trajectory that begins at the building’s entrance, and then goes all the way to the surface of the projection screen at the other end of the space, embodies a real and a virtual journey for the viewer, traversing the neo-Gothic arches of the Vleeshal while at the same time passaging through the narrative imaginary of the projected imagery. The work engages a triple signification of the Vleeshal itself, which has the style and atmosphere of a Gothic church, yet whose original function centuries earlier was as a cold house for the storage and sale of fresh meat, and which is now a public exhibition space for contemporary art. This convergence of esoteric, corporal and aesthetic forces becomes relational to the conjunction of sacred, profane and carnal allusions presented in the work's iconographic progression. The Klein collage intimates an inversion of the archetype of Mary holding Christ’s limp body, which then morphs into Oshima’s cruciform organisation of male and female bodies, whose underlying digital formation then recalibrates itself in Bosch’s esoteric corporeality. 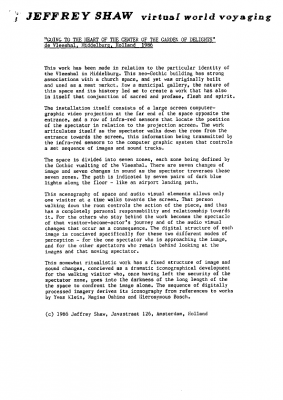